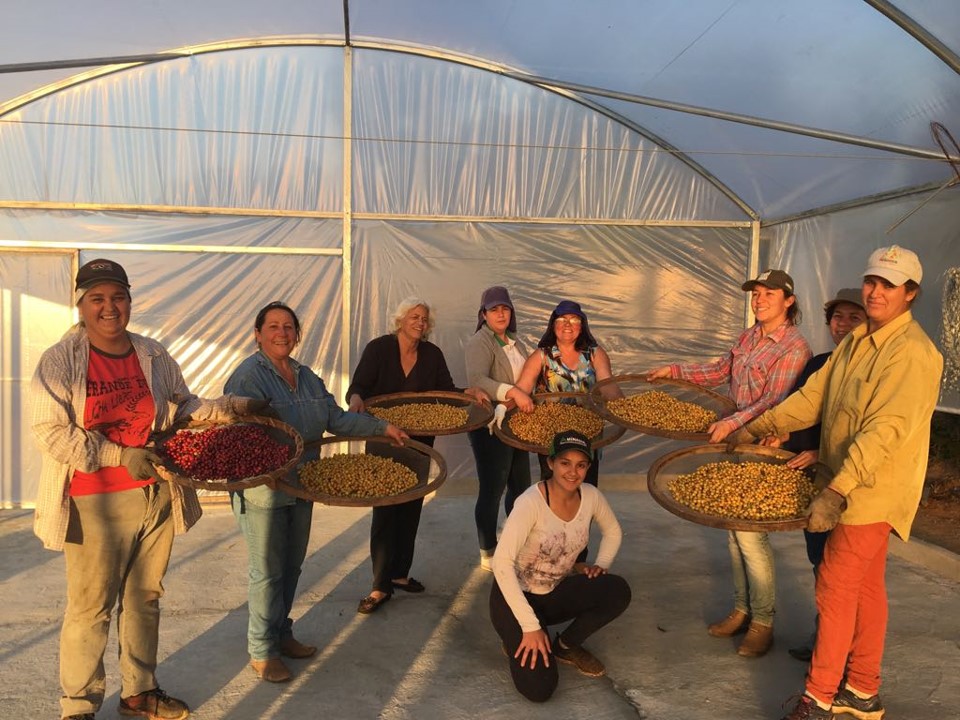 It is time to recognise the contributions of women to the coffee chain and support their continued growth. With that in mind, we’ve partnered with our long-time suppliers from APAS (Alto da Serra Producers’ Association) to support a project that creates better opportunities to their female members. Flowers in Action values their hard work and promotes activities to help their professional and personal development.

This is an ongoing project. Every year Minas Hill Coffee will bring micro-lots produced by these true heroines to Australia.

“Flores em Ação” or Flowers in Action encourages women to produce, process and brand their very own coffee, showcasing their talent, creativity and journey. Their dedication and passion have proved to be essential ingredients in the creation of outstanding micro-lots. All revenues of this project go straight to the women involved.

The financial support from this project will also be used to empower those women and help them become decision-makers in the coffee chain. A way of doing that is facilitating their participation in activities that can enhance their careers such as education, seminars, excursions to coffee expos and English classes.

As a result, this year Minas Hill Coffee has 8 micro-lots from these female farmers. Discover who they are: 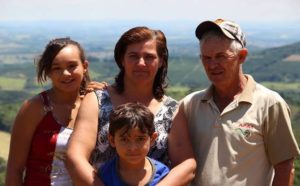 Marcia started working with coffee around 3 decades ago. Her land is located at Mantiqueira de Minas region – an area very favorable for quality coffee. She is the main pillar of her family, a strong woman who is also the reference for her daughter. “Andressa is a talented new-generation farmer who is writing her own story” – says Marcia.

Working with coffee has some downs, Marcia tells, specially when facing low prices as she needs to find ways of keeping up with bills. But she also sees the positive side of it, when she can be creative and produce her own coffee. “The hope of producing a valuable micro-lot makes all our efforts worthy” – she says. Her coffee has been awarded in local competitions and has notes of rapadura sugar and red fruits. 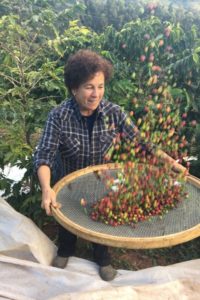 Patricia is the 3rd generation of coffee grower in her family, having inherited the passion for coffee from her father and grandfather. She started to work at the farm at the age of 20 and today she has 100,000 coffee trees. The main varietals are Mundo Novo, Catucai and Yellow Bourbon. In 2012 she started a new era as a coffee grower. She became the main point of contact at the farm and also started to took care of the part that belonged to her siblings.

“We always had a high-quality coffee here, but it was only after becoming a member of APAS that we actually realised the exceptional product we had. That’s when I started to change the way we produced our coffee. I faced a lot of challenges with staff, specially being a women. There were times when the workers just wouldn’t do things the way I asked” – says Patricia. However all her efforts seem to be working. Her coffee stands out in local competitions. She was awarded as the 3rd best coffee of Brazil at the International Coffee Week in Belo Horizonte – Minas Gerais. 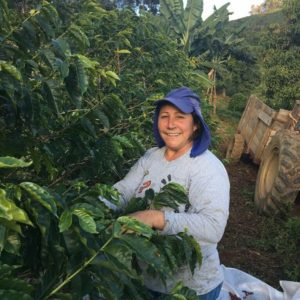 Lucimeire or “Meire” from Fazenda Fortaleza has an immense heart. She is a hardworking women who is always there to help others no matter what. Her story starts at São Gonçalo do Sapucaí village, where she was born. She only left her hometown to help her father at work, in a construction site in a coffee farm. That’s when she decided to stay there for the coffee-picking season and ended up meeting her husband to-be, Gilson Soares, whose father was a coffee farmer. Since then, they had 3 kids and worked hard at the family’s land.

Meire has big plans for herself and her family. That’s why she started doing selective harvesting and focusing on coffee processing. She used to repeat to herself “this is my coffee, Meire’s coffee, the one I intend to sell. I need to add aggregated value to it so I can have some money to do my own things more independently”. Well, we can only say that it worked out perfectly. Her coffee has notable superior quality and balanced acidity, sweetness, chocolate and almonds. 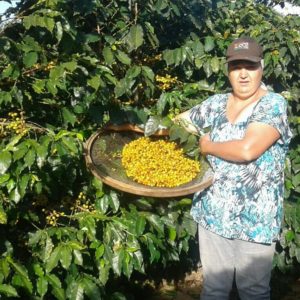 Maria Simone met Luiz Carlos Borges when she worked as coffee picker. They got married years later and she is proud to say she was the one who planted the very first coffee tree in their small farm. They now have 2 kids and they all work together at the farm.

Mrs Borges has always been searching for new ways to improve quality and focusing on organic farming. Last year, she worked hard to produce her own micro-lot. Alone she took care of all stages from picking to processing. Her coffee stands out by having a fruity and sweet profile, full body and balanced acidity. 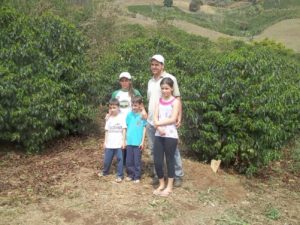 After getting married with Joao Borges, Ana Claudia found herself living at a coffee farm. That was the motivation she found to help her husband and get involved in the coffee activities. Since then, she has dedicated herself to a small part of their land and learned what it means to be a coffee producer.

“The knowledge I have today makes me understand that coffee can absorb endless attributes that make it a valuable product. That’s why I’m committed to finding ways of improving quality” – says Ana Claudia. She continues, “My small property is only 1 hectare, at altitudes that range from 1200 to 1300m. Today I see it as an opportunity for my kids to work at the farm and have a living.” Her coffee has notes of yellow fruits, sweetness and balanced acidity. 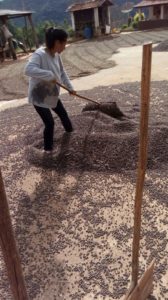 Adriana was immersed in coffee since she was a young girl. By the age of 7, she remembers helping her grandmother out during the harvest season. “Me and my brother would pick the little beans that would spill out of the coffee sieve – a very ancient way of separating the beans”, says Adriana. As an adult, she worked at the public sector but always helped out at the farm when she could. The responsibilities of being a mother made her focus on her career. Still, she used to work at the farm along with her husband and father-in-law during her holidays.

After her retirement, she started to dedicate herself once again to coffee. She dreams, “When I decided to return to the coffee fields I wanted to take care of my coffee just as a mum looks after her baby, with plenty of care and devotion”. That’s the mindset she had to produce her first micro-lot, a specialty coffee full of chocolate, caramel and red fruits. 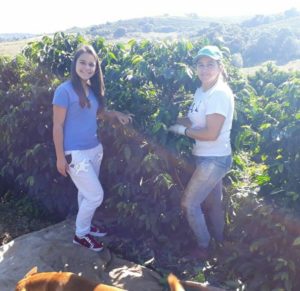 Cintia worked as a coffee picker since she was single. After she got married to Alisson Batista Borges, a coffee farmer, she then took the challenge of being a female farmer herself.

Cintia says she had to conciliate the work at the farm with the work at home. She believes that specialty coffee can be the way to guarantee a good future to her daughter Ana Rubia. “I am a dreamer, I have big plans for the future and I want to grow as a producer. I’m always searching for knowledge that can be applied at the farm. I need to encourage my daughter to follow my steps” – she says. Ana Rubia is really enthusiastic and that’s why her mother has dedicated her first micro-lot to her. Her coffee has full body, acidity and striking sweetness. 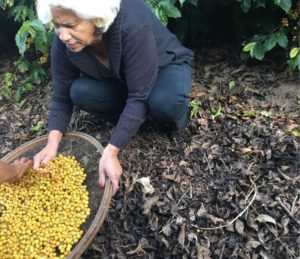 Dulcineia or “Dulce” is an strong women and an inspiration to all of us. The fact that she was born blind was never a reason to fear the future and her own destiny. She is married to Jose Paulo Borges, who worked at his father’s coffee farm since he was young. Dulce encouraged Jose to have his own land so he could have his own earnings and they could build a life together. That’s how they started their life together, facing the difficulties that commonly arise to young couples.

Dulce says that working with coffee is very gratifying for her, not only because of the remuneration but also because of the ones who value her hard work. “There are moments when Jose Paulo finds himself a bit down, but then he thinks of me and all that I’ve been through, and how I am such an independent women, able to roast, grind and pack our own coffee. He gets motivated and that’s how he keeps working with devotion and love” – she says.