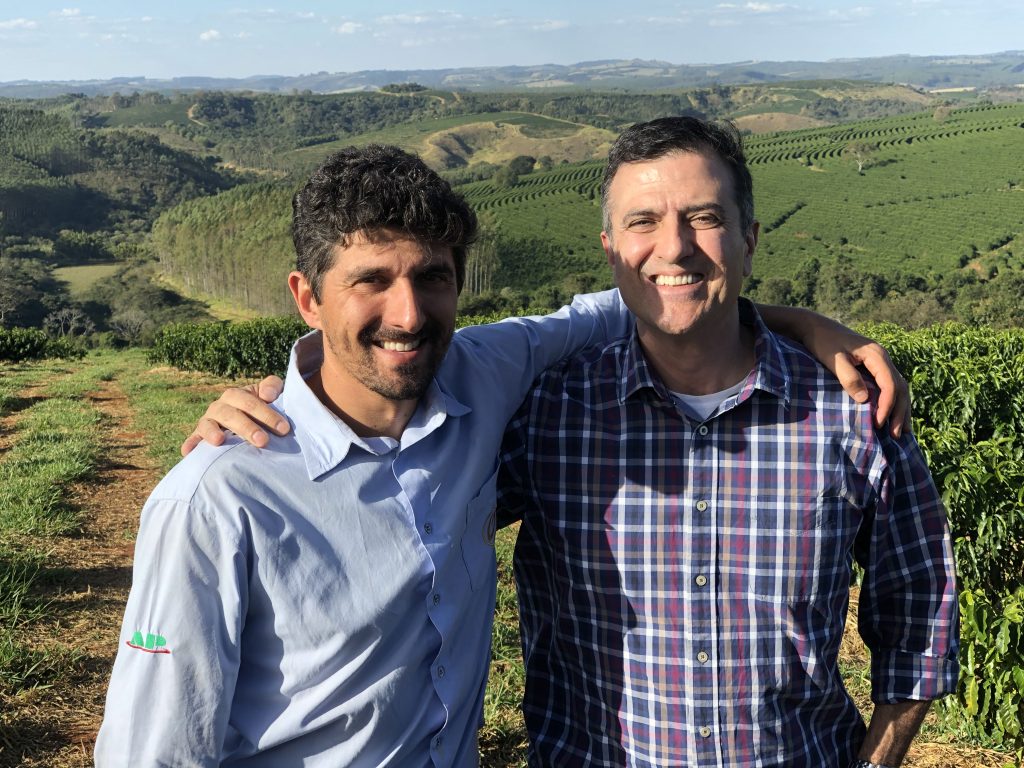 Pedro comes from a family with more than 150 years coffee farming experience. A sixth generation Brazilian coffee farmer, his involvement with the coffee industry began in 2001 when he began coffee bean roasting during his university years. After graduating in 2004, Pedro’s father encouraged him to join the family business. He spent a couple of years learning about the industry and the commercial aspects, and later became fully involved in all production aspects of the family farms.

Pedro’s emphasis on quality comes from his father, always aiming to improve the quality of the coffee each year, with a focus on being open to new processes and ideas. At the same time, his commitment to the environment comes from his mother. Pedro is proud to be able to provide quality, traceable, single-origin coffee.

Pedro’s family is committed to protecting the natural habitats around his farms and educating the community on the importance of preservation. His sister Mariana is involved in ongoing projects to create environmental awareness and improving the relationship between workers and their families, with the hope of a better future for the generations who follow. Having many social projects in place provides a platform to improve workers’ wellbeing.

Pedro can proudly claim his coffee farms to be Carbon-Free. His Pinhal farm was named Brazil’s most sustainable farm in 2019. Whilst only legally required to preserve 20% of the land by Brazilian legislation, Pedro’s Pinhal and Santo Antonio farms preserve in excess of 40% of their land. A further 70Ha is dedicated to the SOS Mata Atlantica Project. Local children are involved in tree planting as part of Children’s Education Program. Pedro’s farms continually focus on improving methods of controlling soil erosion.

The Portuguese word asas (meaning wings) is also the abbreviation for:

The aim of the ASAS Project is to reintroduce illegally-traded or mistreated animals to their natural environment. In support, it has the backing of two governmental agencies. Mariana Gabarra (Pedro’s sister) is the one who embraced the project and made it possible. Last year, Marcelo Brussi had visited Pinhal farm and the aviaries, and had the opportunity to interview Mariana and learn more about the project. Watch the video below:

Brazil is second in the world (only to Colombia) for diversity of bird species, comprising almost 2,000 of the 10,000 species on the planet. Brazil has the highest number of threatened bird species in the world. The billions of dollars in Brazil’s illegal wild animal trade comes third, behind its illegal drugs and weapons trade, with the majority of this wild animal trade being in birds. Sao Paulo state has seized 230,000 birds from illegal trade in the past ten years.

Birds are seized from illegal trade, mistreatment or in some cases domesticated birds are handed back by their caregivers for rehabilitation and release back into the wild. These birds are transferred to a government facility for a 15 day quarantine and rehabilitation process, located in the facility’s nursery where they receive appropriate care and nourishment. Clinical and laboratory examinations are also performed there.

The birds are then moved from this facility to the selected release area on farms, where the full responsibility and management of the birds belongs to the property. After approximately 2 weeks in the aviary to acclimatise, the birds once healthy and ready to fly are released back into the wild.

In 2016 Pedro applied for his farms to be a release area for the ASAS rehabilitation project. He became a partner of the program in 2018, when the final approval was attained following satellite observation and field analysis.

Pinhal farm now has two farm aviaries. Involving kids from the community makes a positive difference to the project.

You can be part of the WINGS project and share the same values with your customers. Get involved, email to learn more.